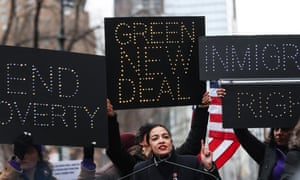 Alexandria Ocasio-Cortez at the Women’s March in January as activists call for a Green New Deal. Photograph: Anadolu Agency/Getty Images

What is the Green New Deal and is it technically possible?

The document also endorses universal healthcare, a jobs guarantee and free higher education – a huge shift in messaging from nearly a decade ago, when Democrats were advocating for a cap-and-trade system to limit greenhouse gases by allotting industry permits for pollution.

Sixty members of the House and nine senators are co-sponsoring the resolution, including several presidential candidates, according to a fact sheet provided by congressional aides. However, any legislation would be dead-on-arrival with Republicans in control of the Senate and the White House, and would be difficult for Democrats to implement even if they controlled government. In supporting documents staffer acknowledge the investment required would be “massive”.

The Massachusetts senator Ed Markey is launching the language of the plan with Ocasio-Cortez on Thursday. Discussions on what shape it would take also involved major environment, justice and labor organizations. Backers hope the six-page resolution will push Democrats vying for the White House in 2020 not just to sign on to the general idea, but to lay out specific legislative goals.

Ocasio-Cortez, a democratic socialist from New York who has been in Congress for just over a month, centered her campaign on climate change and a Green New Deal.

But the resolution itself focuses on the tenets of a progressive policy platform as much as it does on climate change.

It is both a framework for a cleaner-energy future and a plan for a large-scale mobilization that would rival in scale and scope the progressive New Deal policies ushered in under President Franklin Delano Roosevelt in response to the Great Depression.

One of its goals is “to promote justice and equity by stopping current, preventing future, and repairing historic oppression of indigenous peoples, communities of color, migrant communities, deindustrialized communities, depopulated rural communities, the poor, low-income workers, women, the elderly, the unhoused, people with disabilities, and youth”. 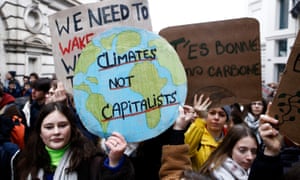 The resolution text comes as Donald Trump frequently questions the science that shows humans burning fossil fuels are causing temperatures to rise and exacerbate extreme weather. He did not mention climate change in his annual address to Congress this week, despite increasing warnings from scientists.

Democrats in the majority in the House are trying to raise awareness of climate change as an impending crisis, with two committees holding hearings this week and a third to follow next week. But Republican lawmakers remain resistant to any legislation to limit greenhouse gas emissions.

Republicans in dual climate change hearings called by House Democrats yesterday attacked the as-yet unwritten Green New Deal, charging that it would be far too expensive and would worsen poverty. Ocasio-Cortez and her supporters say the strategy is designed to do the opposite – to create jobs in a green economy.

Meanwhile, Trump’s agencies continue to roll back climate regulations enacted by the Obama administration. And US carbon emissions increased last year, according to analysis by the economic firm Rhodium Group.

Ocasio-Cortez elevated the Green New Deal when she joined activists at a protest outside the then minority leader Nancy Pelosi’s office last year. The activists are planning to protest Democratic debates in an effort to ensure the proposal, which was until now largely a liberal rallying cry for action on climate change, is a prominent issue for candidates in 2020.

Before the text was released, several presidential candidates had already embraced the notion of a Green New Deal, including senators Kamala Harris, Elizabeth Warren, Cory Booker, and Kirsten Gillibrand. The former San Antonio mayor Julián Castro committed to the plan during his campaign announcement.

The Democratic congresswoman Pramila Jayapal, who is the co-chair of the House progressive caucus and a sponsor of the legislation, said the resolution defined the scale and scope of what must be done to combat global warming.

“We really need an urgent and comprehensive approach,” said Jayapal.

Such legislation has little chance of becoming law as long as Republicans control the Senate and Trump is president. But Jayapal said Democrats would continue to lay the groundwork for a Green New Deal while pushing more incremental legislation.

“This is a moment for us to push a comprehensive view of the challenge before us,” she said, “and therefore to offer the solution that we need to address that challenge.” 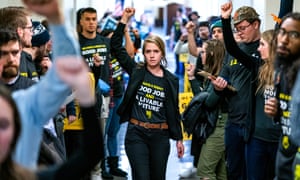 The world has already warmed about 1C since the industrialization in the 19th century and is barreling toward exceeding a 1.5C increase, which climate scientists say will significantly worsen the risks of extreme heat, drought, floods and poverty.

Already, the process for drafting the brief documents has outlined the fights ahead, even among progressives who want climate action.

A background summary prepared by staffers said the plan “sets a goal to get to net-zero, rather than zero emissions, at the end of this 10-year plan because we aren’t sure that we will be able to fully get rid of, for example, emissions from cows or air travel before then.”

But climate justice advocates who represent the communities seeing the worst of environmental damages and pollution already want to quickly phase out all fossil fuels. Many also oppose nuclear power that uses mined uranium but represents a huge portion of the US’s zero-carbon energy.

Angela Adrar, the executive director of the Climate Justice Alliance, a coalition of communities dealing with environmental problems, said her group supported the vision of the Green New Deal, even though members were concerned about what they saw as loopholes to allow some fossil fuels use.

“The Green New Deal is in the beginning processes. We recognize that it’s being proposed in a very difficult political climate, so while it makes sense to have Beltway consensus on a resolution that might come out really soon, the details is what is really going to make the Green New Deal,” Adrar said.

Backers said that even with those differences of opinion, the language released is a significant accomplishment.

May Boeve, the executive director of the environmental group 350.org, said in a press release that the “resolution is a massive step forward on the path to making the Green New Deal a reality”.

“For too long, we’ve seen legislative action fail to live up to the scale and scope of the climate crisis,” she said.